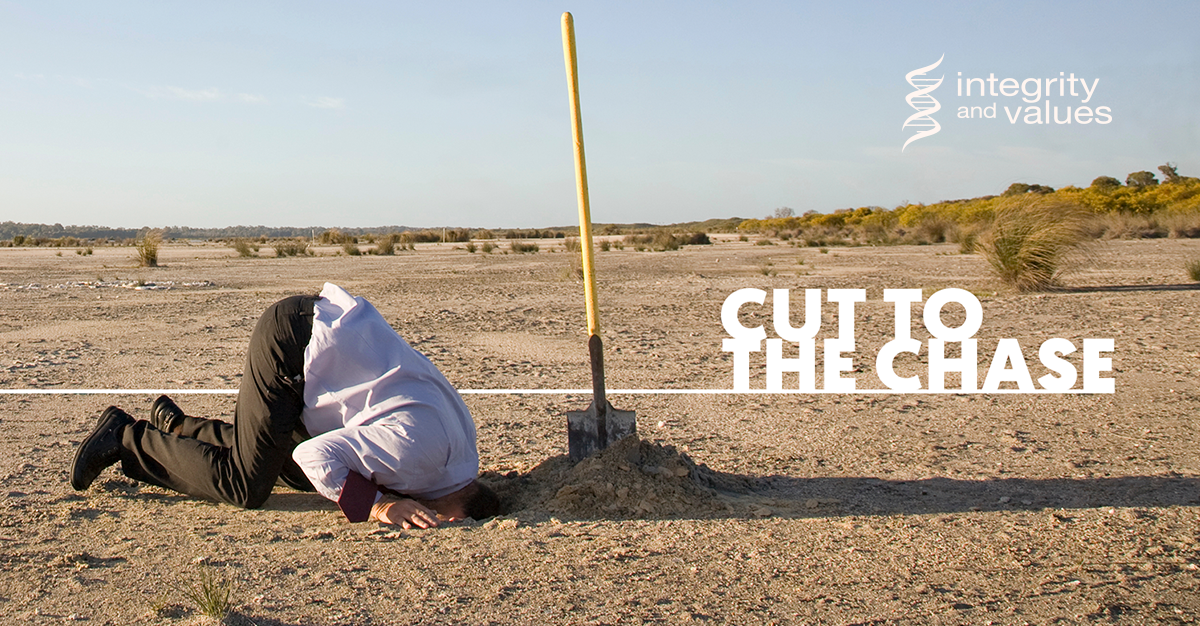 Cut to the Chase: Feedback, conflict and the cost of conversations we avoid

In our recent Integrity and Values Boardroom Breakfast, we began the conversation on Feedback. In this article – and a few to follow – I’ll share some practical kitchen tools and techniques to master the art of giving effective feedback and cutting to the chase.

How often have you tap-danced around an issue in the business? If the answer is ‘often’, you’re not alone.

Seven years ago, I hired a terrific guy into the business. We were excited and so was he. Great experience. Glowing references. Within a short time, I realised that he couldn’t transfer what he knew from his previous corporate successes into our business. I kept quiet, hoping it would change. I had a mental list of all the reasons I’d hired him, of why he should succeed. I let it drag on. I hoped things would shift on their own and avoided the conversation. To his peril and ours.

The void of feedback gave him false expectations. Without feedback, he didn’t have an opportunity to correct while the cracks were small. The longer it dragged on, the wider the cracks, the harder it was to address. My fear stopped me from having that challenging conversation with him. Fear of admitting I might have made a mistake. Fear of bruising him. Fear of losing him, and the potential value I hoped he’d bring. Avoiding the conversation was the most painful thing I could have done – and we all paid the price.

What’s your version of this story? What are you tap-dancing around, and why? What’s getting in the way of saying what needs to be said?

There are plenty of reasons we avoid tough conversations: Fear; conflict avoidance; not wanting to hurt feelings or rock the boat; not backing ourselves; riding it out in the hope that things will change. They won’t. Which is why I challenge you to cut to the chase, give feedback early and directly, before the cracks widen. If you don’t – don’t under-estimate the personal, organisational and opportunity cost of the conversation you’re avoiding.

The Paradox of Feedback

There’s a great line in Ben Horowitz’s book “The Hard Thing about Hard Things” (a worthwhile read, offering practical advice on the problems that confront leaders every day) – which describes being a CEO as “highly unnatural”. CEO’s need to do things that people don’t like in the short term, so that they’re loved in the long term. Giving feedback feels unnatural because we want people to like us. We know our people are hungry for feedback, yet for most of us Feedback = Discomfort = Struggle. The paradox is: people love us when we give them tough feedback.

When is conflict good and when is it bad?

Conflict exists between two or more people when one has needs of the other and the need is not being met. Conflict is important in building effective teams, only in the ‘fight’ as a team do we grow! When we’re silently fuming, not giving feedback, frustration levels increase. The buildup can be destructive when it erupts. Saying nothing will have your people do one of two things, either they “quit and stay” or “quit and leave”.

Giving effective feedback sets up an accountability structure. It clarifies expectations on both sides. Your reward is freedom, theirs is empowerment. Giving tough feedback might feel unnatural and uncomfortable, however, those conversations open up the opportunity for people to grow. They provide the impetus to take action in another direction and unleash transformational potential.

Our acronym for ‘NICE’ is “Nothing In me Cares Enough to tell you the truth”. Being nice and polite – instead of direct and authentic – dilutes the message and its weight. It’s worse than no feedback. It provides an excuse for those ‘slippery eels’ to wriggle out of the accountability structure. Don’t be nice, be direct, specific and authentic. Give feedback early and often. And above all, don’t underestimate the personal, organisational and opportunity cost of the tough conversations you choose to avoid.

In this article we’ve spoken about the importance of feedback for our people and our organisation. In the next: How to give effective feedback.

Jennifer Elliott is the founder and CEO of Integrity and Values, a leadership development organisation that empowers leaders to build responsible teams that produce extraordinary results.

Recognised as one of Australia’s leading executive leadership and behavioural change consultants, Jennifer has worked with teams and individuals across Australia for over 30 years..

Jennifer’s impressive sales and management history is supported by her own experience owning and running successful multi-million dollar companies and through building and leading her own effective teams. She has first-hand knowledge on the business building process, the payroll struggle, confronting management issues and dealing with cash-flow problems.

This site uses Akismet to reduce spam. Learn how your comment data is processed.