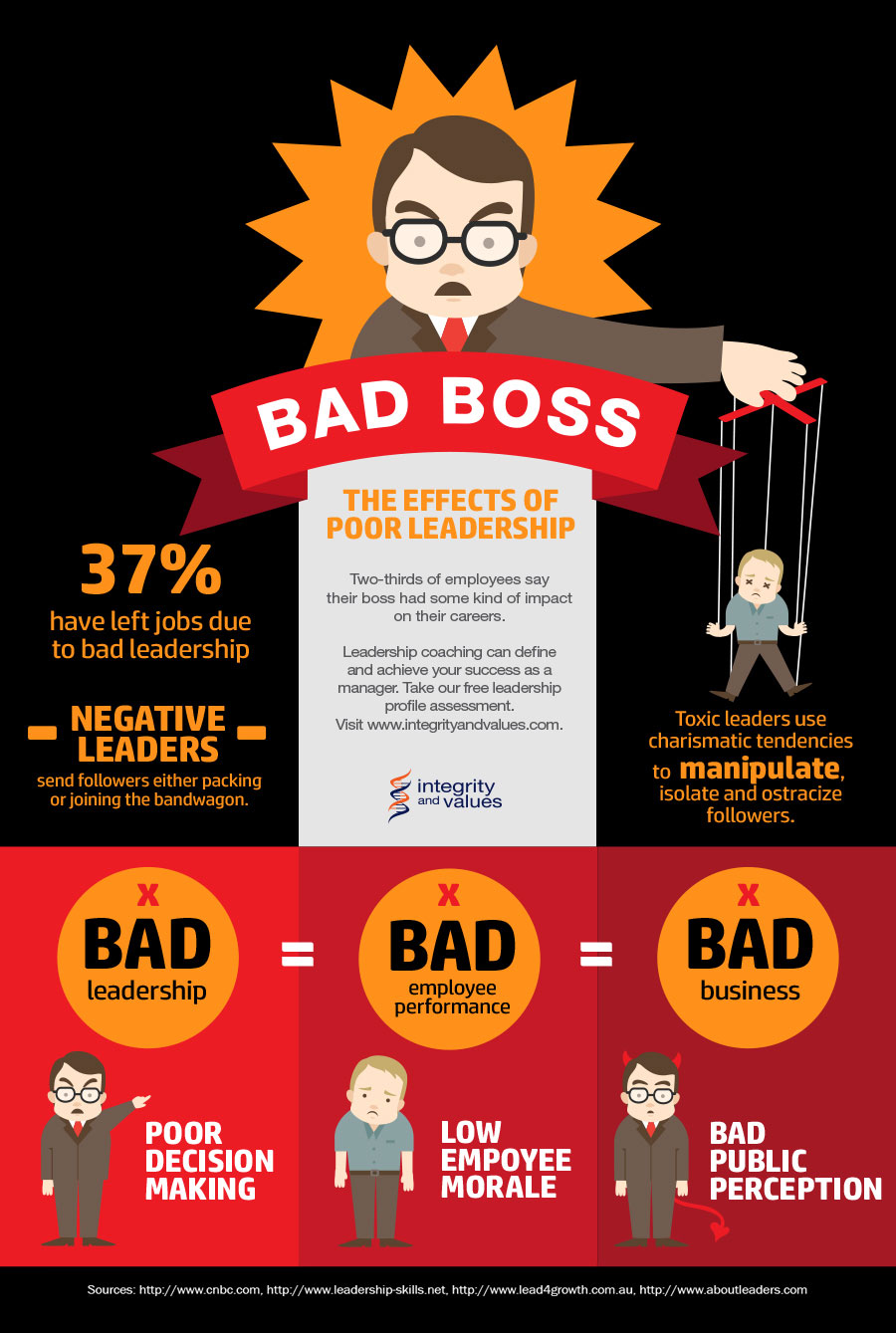 The Cost Of Poor Leadership

A survey by market researcher ‘Harris Interactive’ reveals that almost 70% of its respondents believe their manager had an impact on their career. And while about half declare that the effect had been positive, about 20% say their manager had a negative effect on their career. Whether the manager is oppressive, deceitful, or just plain incompetent, bad leaders can take a heavy toll on an employee’s life and an organisations productivity and profitability.

Employee turnover is a strong indicator of poor leadership. Studies by data analysis firm ‘Evolv’ conclude that while a toxic boss can predict employee departure, when you engage with your team you can retain workers five to six times longer than the “drill sergeant” type of boss.

When employees put off a much-needed resignation they run the risk of getting infected by the “bad boss bug.” ‘Ask a Manager’ blogger Alison Green says the danger of allowing poor leadership in your organisation is the damaging habits are transferred to other team members and can linger even after the poor leader leaves. Accommodating a ‘bad’ leader can recalibrate your ideas and your team’s ideas of what is acceptable. When the dysfunctional mindset becomes ingrained, it will be hard to let it go even when the bad leader has left.

Catching the “bug” also means, literally, getting sick. According to Jonathan D. Quick of Harvard Medical School, a team member’s prolonged exposure to a leaders bad qualities has been linked to cardiovascular and mental health issues.

It’s not only employees who flee from bad leaders; customers do, too. Numerous studies show a strong relationship between employee and customer satisfaction. A case study for store chain Sears, states that customer approval rose by 1.3% when worker engagement increased by 5%. Given this correlation, customer perception will most likely decrease when employee satisfaction goes down.

So, how can managers avoid turning into monsters? Aside from given traits such as empathy, truthfulness, and responsibility; personal happiness is one key characteristic of a good boss. According to Integrity and Values, “when an individual is happy with their current life circumstances, they can look at the future without fear.” A boss with a happy disposition is more likely to model positive behaviours and increase employee morale.

The Integrity and Values Profiling System has identified these and 16 other qualities that will effectively connect leaders with their team. Click here to discover all of them

ARE YOU A WORLD CLASS LEADER?

Accountability is a key leadership trait

Take this quick survey on accountability and see how you stack up!